“If, in the opinion of the people, the distribution or modification of constitutional powers be in any particular wrong, let it be corrected by an amendment in the way in which the Constitution designates.” “The Constitutional door is open for such amendments as shall be thought necessary by nine(two-thirds of the) states.”

Article V Day quote:
If, in the opinion of the people, the distribution or modification of the constitutional powers be in any particular wrong, let it be corrected by an amendment in the way which the Constitution designates. But let there be no change by usurpation; for though this, in one instance, may be the instrument of good, it is the customary weapon by which free governments are destroyed. - George Washington 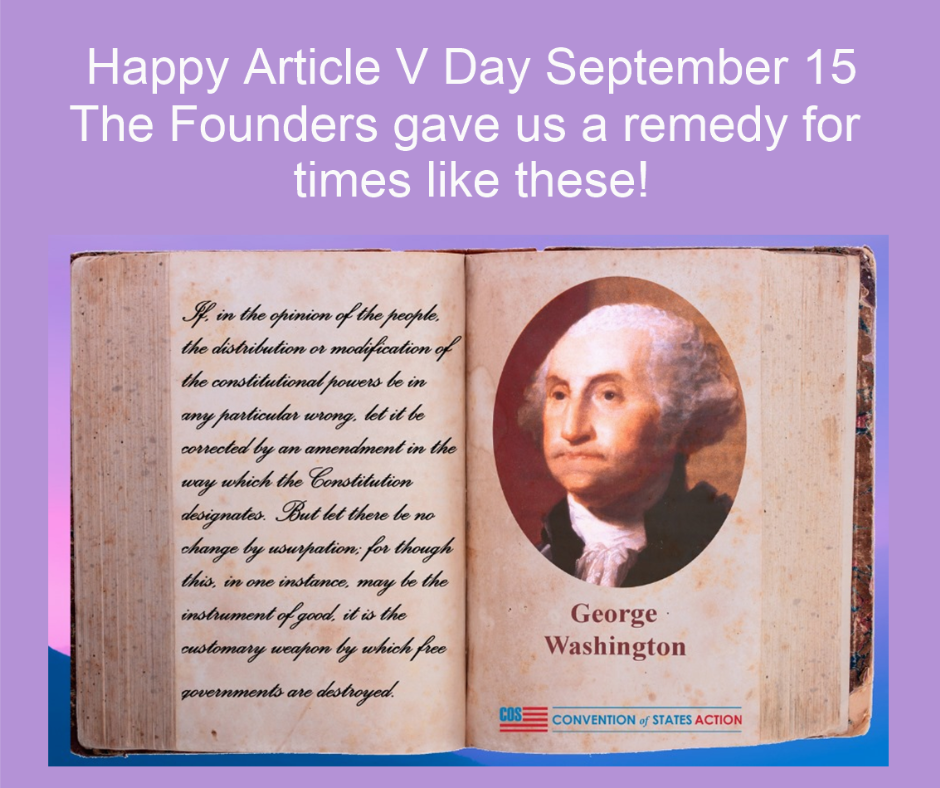 The warmest friends and the best supporters the Constitution has, do not contend that it is free from imperfections; but they found them unavoidable, and are sensible, if evil is likely to arise therefrom, [that] the remedy must come hereafter; for in the present moment it is not to be obtained. And as there is a constitutional door open for it, I think the people (for it is with them to judge) can, as they will have the advantage of experience on their side, decide with as much propriety on the alterations and amendments which are necessary [as] ourselves. I do not think we are more inspired, have more wisdom, or possess more virtue than those who will come after us.”

“It would be improper to require the consent of the National Legislature, because they may abuse their power, and refuse consent…”

–George Mason (June 11, 1787, from notes of the debates in the Constitutional Convention of 1787 as reported by James Madison)

“the proposing of amendments is in both the modes to depend, in the first immediately, in the second, ultimately on Congress, no amendments of the proper kind would ever be obtained by the people, if the Government should become oppressive.”

–George Mason (September 15, 1787, from notes of the debates in the Constitutional Convention of 1787 as reported by James Madison)

“It, moreover, equally enables the general and the State governments to originate the amendment of errors, as they may be pointed out by experience on one side, or on the other.”

“By the fifth Article of the plan, we may safely rely on the disposition of the state legislatures to erect barriers against the encroachments of the national authority.”

“The ultimate arbiter is the people of the Union, assembled by their deputies in convention, at the call of Congress, or of two-thirds of the States. Let them decide to which they mean to give an authority claimed by two of their organs. And it has been the peculiar wisdom and felicity of our constitution, to have provided this peaceable appeal, where that of other nations is at once to force.”

“This country, with its institutions, belongs to the people who inhabit it. Whenever they shall grow weary of the existing Government, they can exercise their constitutional right of amending it…While I make no recommendation of amendments, I fully recognize the rightful authority of the people over the whole subject, to be exercised in either of the modes prescribed in the instrument itself; and I should, under existing circumstances, favor rather than oppose a fair opportunity being afforded the people to act upon it. I will venture to add that to me the convention mode seems preferable, in that it allows amendments to originate with the people themselves, instead of only permitting them to take or reject propositions originated by others, not especially chosen for the purpose, and which might not be precisely such as they would wish to either accept or refuse.”

“All that is granted us by the 5th article is that, whenever we shall think it necessary, we may propose amendments to the Constitution; not that we may propose to repeal the old and substitute a new one.”

“Through their state legislatures and without regard to the federal government, the people can demand a convention to propose amendments that can and will reverse any trends they see as fatal to true representative government.”

The Constitution provides for both methods and the Convention is a safety valve giving the people a chance to act if Congress refuses to.”

“The liberties of our country, the freedom of our civil Constitution, are worth defending at all hazards; and it is our duty to defend them against all attacks. We have received them as a fair inheritance from our worthy ancestors: they purchased them for us with toil and danger and expense of treasure and blood, and transmitted them to us with care and diligence. It will bring an everlasting mark of infamy on the present generation, enlightened as it is, if we should suffer them to be wrested from us by violence without a struggle, or to be cheated out of them by the artifices of false and designing men.”

“If ye love wealth greater than liberty, the tranquility of servitude greater than the animating contest for freedom, go home from us in peace. We seek not your counsel nor your arms. Crouch down and lick the hand that feeds you; and may posterity forget that ye were once our countrymen.”

“I've noticed that everyone who is for abortion has already been born.” - Ronald Reagan