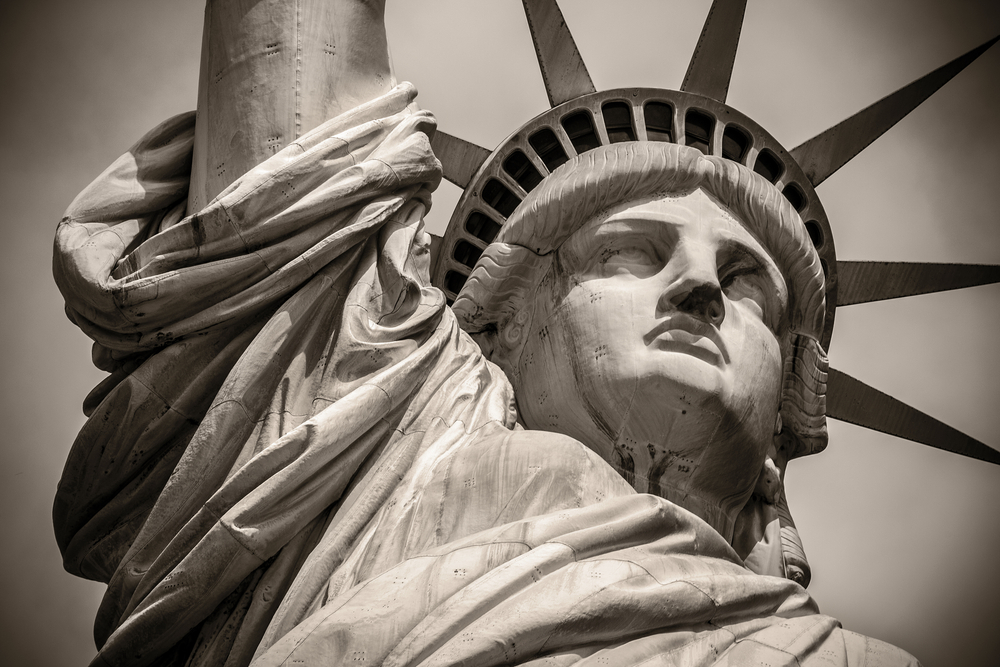 John Birch Society Denies Its History and Betrays Its MissionJBSJohn_Birch_Societyconstitutional_conventionproposing

In a recent article entitled “Falsehoods Mark the Campaign for a Constitutional Convention,” the John Birch Society (JBS) President John McManus, paints a picture of longstanding, consistent JBS opposition to the use of Article V's convention mechanism. He states:

“For one excellent reason, The John Birch Society has always opposed the creation of a constitutional convention (Con-Con) as authorized in Article V of the Constitution.” 1)

“Some [Article V] proponents also claim that John Birch Society Founder Robert Welch and Congressman Larry McDonald, his 1983 successor, advocated the Con-Con route in favor of the “The Liberty Amendment.””

“But neither Robert Welch nor Larry McDonald nor this writer (current JBS President) has ever advocated a Con-Con on behalf of the Liberty Amendment or any other amendment.”

But McManus' claim that JBS has always opposed a convention under Article V is simply not accurate.

Let's go back in time and see how all of this unfolds. In 1944, Willis E. Stone drafted the Liberty Amendment, which sought to vastly restrict federal authority and repeal the Sixteenth Amendment. Nine states passed Liberty Amendment resolutions.

Here is the text from Louisiana's resolution:

Sec. 1: The Government of the United States shall not engage in any business, professional, commercial, financial or industrial enterprise except as specified in the Constitution.

Sec. 2: The Constitution or laws of any State, or the laws of the United States, shall not be subject to the terms of any foreign or domestic agreement which would abrogate this amendment.

Sec. 3: The activities of the United States Government which violate the intent and purposes of this amendment shall, within a period of three years from the date of the ratification of this amendment, be liquidated and the properties and facilities affected shall be sold.

Sec. 4: Three years after the ratification of this amendment the sixteenth article of amendments to the Constitution of the United States shall stand repealed and thereafter Congress shall not levy taxes on personal incomes, estates, and/or gifts.

One would have expected The John Birch Society and its leaders–who profess to advocate for limited government–to have been strong advocates of these resolutions. And that is exactly what they were under the leadership of Robert Welch and Larry McDonald back in the 1960s-1980s.

Here is The John Birch Society Bulletin for August, 1963, with an urgent message from Robert Welch asking all Chapter Leaders and members to send telegrams and letters urging the Alabama Senate to pass the resolution calling for the Liberty Amendment. 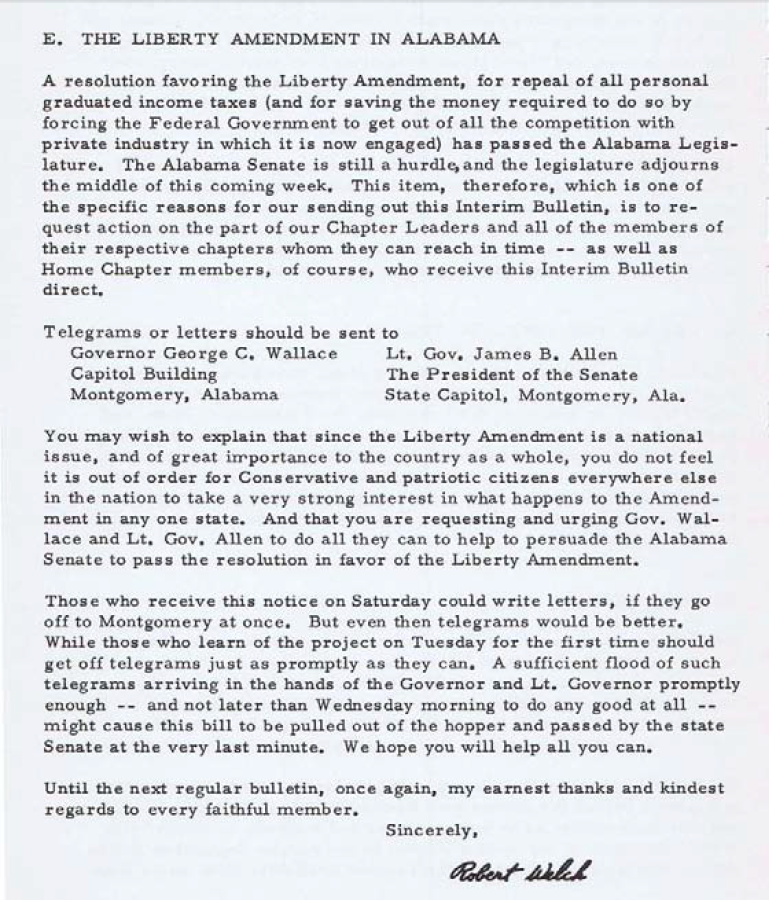 RepresentativeLarry McDonald, from Georgia, who served at the time on the John Birch Society's National Council, introduced the Liberty Amendment in Congress on October 9, 1975 and gave extensive testimony–including responses to 74 questions about the amendment. Among those questions and answers were the following: 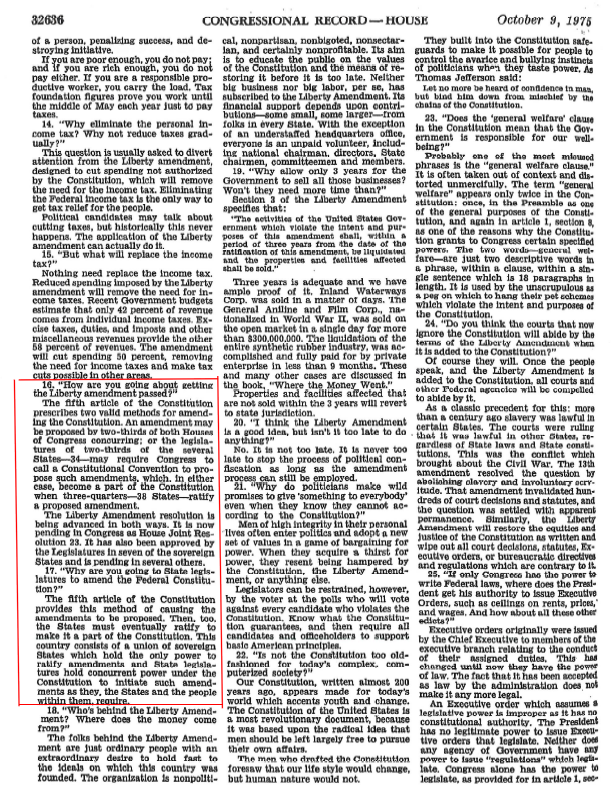 16. “How are you going about getting the Liberty Amendment passed?”

The Liberty Amendment resolution is being advanced in both ways. It is now pending in Congress as House Joint Resolution 23. It has also been approved by the Legislatures in seven of the sovereign States and is pending in several others.”

17. “Why are you going to State legislatures to amend the Federal Constitution?”

The record speaks for itself. And it flies in the face of McManus' insistence that ”[N]either Robert Welch nor Larry McDonald . . . has ever advocated a Con-Con on behalf of the Liberty Amendment or any other amendment.“

It would behoove Mr. McManus to read Larry McDonald's book, We Hold These Truths, published a year after his testimony, for in it McDonald explains the reasons why he advocates strongly for an Article V convention: 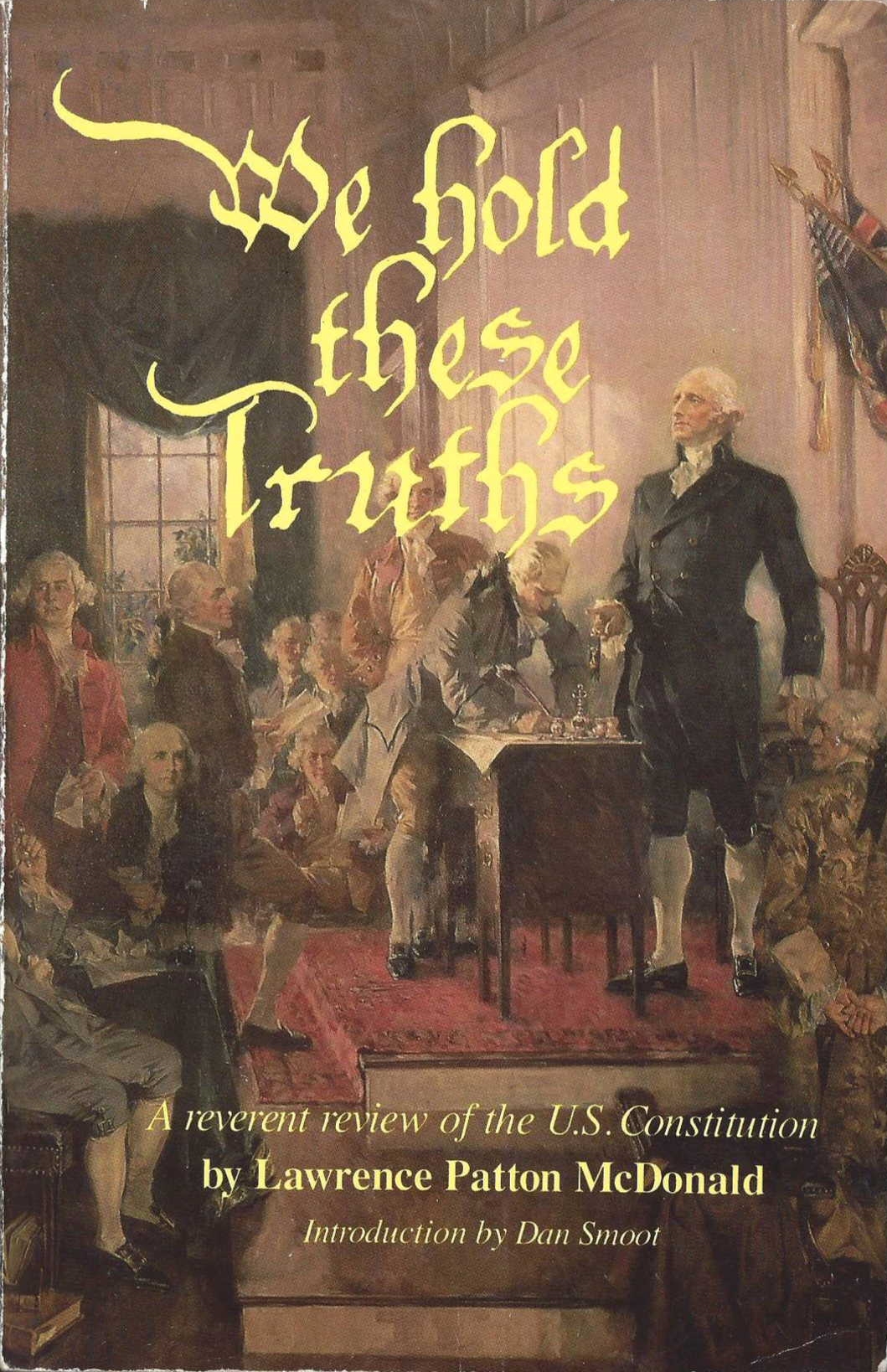 “The Framers provided means for the people to amend the Constitution-means which virtually circumvent federal officials. The President and the federal courts are given no role whatever in the amendment process. Congress is authorized to propose constitutional amendments if it pleases. It is obligated to call a special convention to propose constitutional amendments if two-thirds of all state legislatures demand that it do so; but Congress is given no hand in the actual ratifying or rejecting of proposed amendments. The amendment process is slow, and it was made so deliberately, in making changes in their organic law, people should not be stampeded by demagoguery, mob psychology, or false promises. The public should have ample time to think, study, debate, and reflect before making constitutional changes that affect all of them and their posterity. As James Madison put it, the amendment process was designed specifically to “guard…against that extreme facility, which would render the Constitution too mutable.” Lawrence Patton McDonald We Hold These Truths (The Larry McDonald Memorial Foundation Inc. Marietta Georgia, 1976), 27.

So how does Mr. McManus deny all of this evidence? Here is his answer:

”I vividly recall questioning Willis Stone about the danger that 34 states would indeed call for a Con-Con. I noted that if that number of state applications for a convention were reached, then the Constitution requires that Congress “shall call a convention for proposing amendments.” He emphatically assured me, “No, I don't worry about that because no one is stupid enough to want a Con-Con.”

But listen to Willis E. Stone, in his own words, describing states' actions upon his proposed amendment. Here are some of the state resolutions mentioned by Mr. Stone, all calling for an Article V convention to propose the Liberty Amendment:

Despite McManus' claims to the contrary, the undisputed evidence also demonstrates that former JBS leaders themselves, Welch and McDonald, advocated for an Article V convention to propose the Liberty Amendment. This was consistent with the JBS' mission of limiting government.

It is the current JBS position, in opposition to the use of Article V's convention mechanism to limit the federal government, which is both inconsistent with that mission, and a departure from the organization's own, original position on Article V.

In fact, under its current leadership, the JBS has gone so far as to reverse itself not only on the general idea of Article V, but even on its support for the Liberty Amendment, in particular. It is now working to rescind the Liberty Amendment resolutions that Welch and McDonald helped the states to propose. Here isArizona's Article V Resolution for the Liberty Amendment in 1979and here isArizona's Rescind Resolution of 2003. Notice that the rescind language comes straight out of The John Birch Society Model Resolution for a State Legislature to Rescind All Constitutional Convention Applications. In his recent article, Mr. McManus states, ”Anyone who claims that JBS leaders (past or present) ever intended to have Congress create a constitutional convention either doesn't know what he or she is talking about or is being deceitful.“

At this point it is left to you, the reader, to decide who is being deceitful.