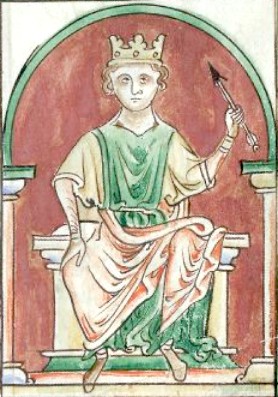 The Charter of Liberties was written by Henry I on his crowning (5th of August, 1100). It included many principles from the laws of Edward the Confessor and it became the basis for the Magna Charta of 1215. Also, this is the first document in England where the King binds himself with laws.

Henry, king of the English, to Bishop Samson and Urso de Abetot and all his barons and faithful, both French and English, of Worcestershire, [copies were sent to all the shires] greeting.

1. Know that by the mercy of God and the common counsel of the barons of the whole kingdom of England I have been crowned king of said kingdom; and because the kingdom had been oppressed by unjust exactions, I, through fear of God and the love which I have toward you all, in the first place make the holy church of God free, so that I will neither sell nor put to farm, nor on the death of archbishop or bishop or abbot will I take anything from the church's demesne or from its men until the successor shall enter it. And I take away all the bad customs by which the kingdom of England was unjustly oppressed; which bad customs I here set down in part:

3. And if any of my barons or other men should wish to give his daughter, sister, niece, or kinswoman in marriage, let him speak with me about it; but I will neither take anything from him for this permission nor prevent his giving her unless he should be minded to join her to my enemy. And if, upon the death of a baron or other of my men, a daughter is left as heir, I will give her with her land by the advice of my barons. And if, on the death of her husband, the wife is left and without children, she shall have her dowry and right of marriage, and I will not give her to a husband unless according to her will.

4. But if a wife be left with children, she shall indeed have her dowry and right of marriage so long as she shall keep her body lawfully, and I will not give her unless according to her will. And the guardian of the land and children shall be either the wife or another of the relatives who more justly ought to be. And I command that my barons restrain themselves similarly in dealing with the sons and daughters or wives of their men.

5. The common seigniorage, which has been taken through the cities and counties, but which was not taken in the time of King Edward I absolutely forbid henceforth. If any one, whether a moneyer or other, be taken with false money, let due justice be done for it.

7. And if any of my barons or men shall grow feeble, as he shall give or arrange to give his money, I grant that it be so given. But if, prevented by arms or sickness, he shall not have given or arranged to give his money, his wife, children, relatives, or lawful men shall distribute it for the good of his soul as shall seem best to them.

9. I forgive all murders committed before the day I was crowned king; and those which shall be committed in the future shall be justly compensated according to the law of King Edward.

10. By the common consent of my barons I have kept in my hands forests as my father had them.

11. To those knights who render military service for their lands I grant of my own gift that the lands of their demesne ploughs be free from all payments and all labor, so that, having been released from so great a burden, they may equip themselves well with horses and arms and be fully prepared for my service and the defense of my kingdom.

12. I impose a strict peace upon my whole kingdom and command that it be maintained henceforth.

13. I restore to you the law of King Edward with those amendments introduced into it by my father with the advice of his barons.

14. If any one, since the death of King William my brother, has taken anything belonging to me or to any one else, the whole is to be quickly restored without fine; but if any one keep anything of it, he upon whom it shall be found shall pay me a heavy fine.

Witnesses Maurice Bishop of London, and William Bishop-elect of Winchester, and Gerard Bishop of Hereford, and Earl Henry, and Earl Simon, and Walter Giffard, and Robert de Montfort, and Roger Bigot, and Eudo the Steward, and Robert, son of Hamo, and Robert Malet. At London when I was crowned. Farewell.